Researchers at the University of Illinois recently discovered a new method to maintain stem cells in an intermediate state for a long time. The research paper was published in the journal PLoS One. In the paper, the researchers said that they used a soft gel to culture mouse embryonic stem cells (mESCs) to maintain the cells in a pluripotent state for a long time. And without adding expensive growth factors, this soft matrix can maintain the growth of homogeneous clones for a long period of time.

"This technology has huge application prospects in the future of regenerative medicine," said Ning Wang, co-leader of the research and professor of medical science and engineering. The results show that we have taken an important step towards revealing the basic biology of stem cells.

It is very difficult to maintain mESC in a uniform and pluripotent state in stem cell research. Pluripotent stem cells can spontaneously differentiate into specialized tissue types such as skin or muscle. For a long time, researchers have used growth factors to maintain the state of mESCs, but even after so long, the cultured cells will enter different stages of differentiation, showing different gene expression and morphology. The diversity of samples makes it difficult for researchers to conduct experiments to induce stem cell culture to generate specific types of tissue.

"Our goal is to differentiate homogeneous, undifferentiated cells towards the tissues of interest and keep them homogeneous," said Tanaka, a professor of animal science at the Institute of Genomic Biology at the University of Illinois. In order to generate specific cell types and ultimately achieve the clinical application of pluripotent stem cells. "

The research team divided the cultured mESCs cells into three treatment groups for parallel experiments: the first group of mESCs cells were cultured with conventional growth factor-added medium; the researchers inoculated the second group of cells on a soft gel with the same hardness as the cells Cultivate and add growth factors; cells in the third group are also cultivated on soft gel, but no growth factors are added. The researchers found that cells cultured on soft gels showed greater homogeneity and pluripotency. Even in the absence of factor factors, after three months of cultivation, this is still true after 20 passages.

In the next experiment, the researchers want to try to use induced pluripotent stem cells (iPSCs) to further verify their soft matrix culture method. "We will try to inoculate mouse iPSCs into the same soft matrix to see if they can be obtained. Homogeneous stem cell culture. If this experiment is successful, its impact will undoubtedly be huge, "Tanaka said.

Our cable spine is an entry level under desk solution that offers affordable Cable Management to the desk. Constructed from durable plastic in compatible colours. Two cable spines can be snapped together making it suitable for sit-stand desk arrangement. Commonly found in offices, the plastic Cable Manager is mounted

beneath of the office table to maintain a variety of cables(Cable Snake) in order. 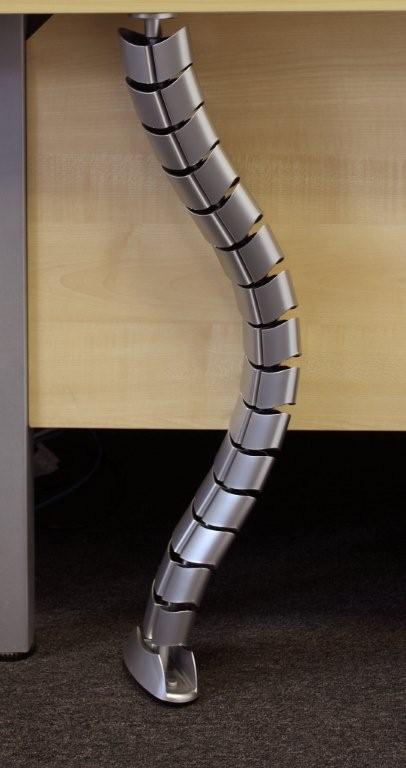